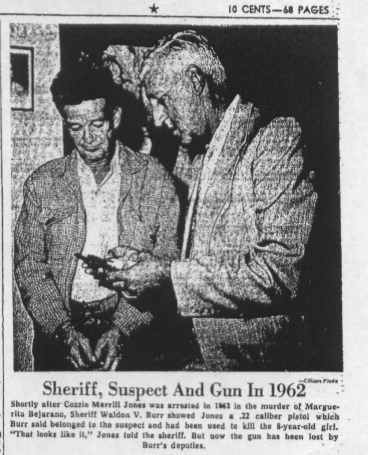 Perhaps none of my blog entries so far has elicited as much comment as Preacher’s Kid, Part One, the post about West Terre Hautean Cozzie Merrill Jones who killed 12 year-old Edith Barton.  Since that post I have been contacted by readers who knew Cozzie (both described him as a “creepy man who made them uneasy.  They have given me some interesting leads (and I have requested his Indiana prison records) that may lead to me being able to learn more about the psyche of the young preacher’s kid who turned out so badly, who was described as totally insane and a con man par excellence.

In the meantime I thought I should continue with at least the bare bones of the Cozzie story.

When we left Cozzie he had been convicted of the murder of young Edith and sentenced to life.  He entered the Indiana State Prison North at Michigan City on November 20. 1942.  For the next 19 years he was 22194.  He escaped in September, 1960.  One Hoosier newspaper reported that he simply “walked away” from the prison’s Summit Farm.  But did he?

Is it that easy to just “walk away.”  Does a prisoner who escapes and evades recapture have to have help?  Where did he get clothes (outside of the clichéd stealing them from an unattended clothesline)?  Who gave him money.  How did he obtain a car (which he was later reported to have repainted by hand to escape capture?

It has been long rumored in Indiana corrections circle that he had inside help.  Some believe that as the consummate con man Cozzie was able to convince some prison officials of his innocence.  It was they, it is said, who aided and abetted his escape.  And escape he did.

Little is known of the immediate aftermath.  Did he immediately leave the state?  Where did he “hole up.”  At this point I can only concretely place his whereabouts at any given time by the crimes he committed.  By 1961 he was living in Arizona, where he had adopted the name “Steve Palmer.”  Cozzie was a very talented piano player and supported himself by play in bars and bands.  As Steve Palmer he was hired out of a local musicians union hall to play in a big band.  The daughter of the bandleader reported he was an excellent player but the family came to fear him.

In March, 1961 a pretty young eight year-old named Marguerita Bajarano went missing while on her way to school in Tucson.  He body was found four days later.  Cozzie eventually confessed, recanted and then re-confessed to her murder.

Cozzie continued to roam, whether it was due to his life as an itinerant musician or the need to keep moving.  Did he perhaps return to Indian for a visit?  He was driving along a highway near Joplin, Mo when he picked up a young Canadian hitchhiker named Robert Fillmore in October, 1962.  Fillmore was headed to California.  He never made it.  Cozzie murdered him and left his body alongside the road.

The Steve Palmer identity was stripped away in Arizona in December, 1962, when two men saw a man trying to abduct a young girl.  They chased the perpetrator who abandoned his car and ran.  Eventually he forced his way into the home of a retired rancher and forced him to drive him away.  Later Cozzie killed him, leaving his body in the desert near Casa Grande, Arizona.  It was for this crime that Cozzie was initially arrested and his identity revealed.

The story of Cozzie Merrill Jone’s conviction, sentence to be executed and long legal battle is for a further chapter. In the meantime, as I find out more about I will post updates.